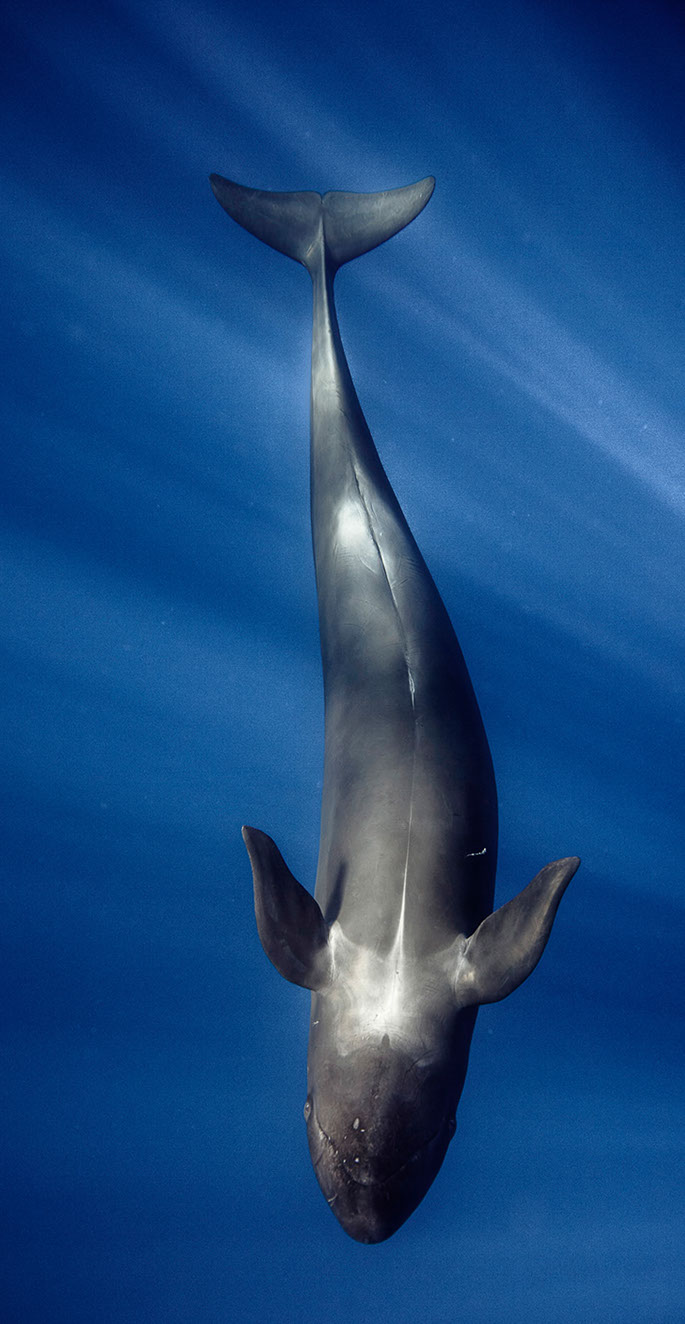 The false orca charges towards our boat. 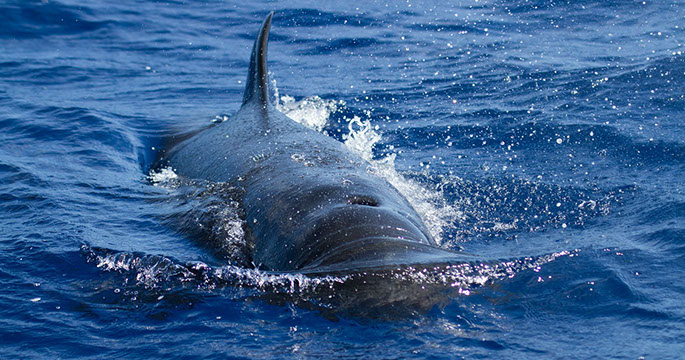 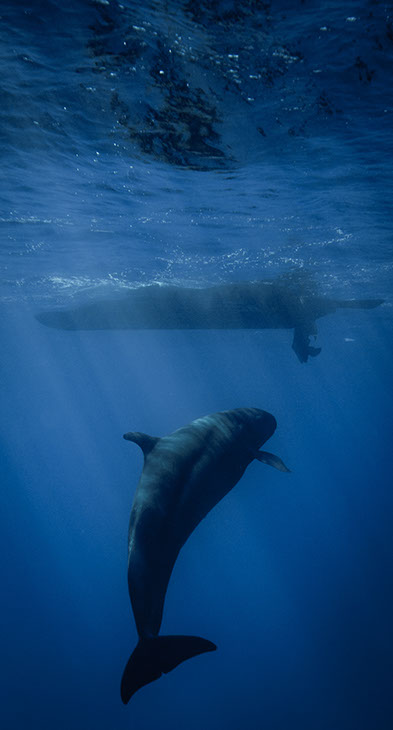 The whale rushed to catch up with our rigid inflatable and romped in the bow wave until we slowed and stopped the boat. It remained under the boat close to the surface, and when I entered the water it immediately swam towards me. It was a false orca ( Pseudorca crassidens ) more correctly a dolphin, rather than a whale. It was alone, whistling and squeaking continuously and loudly. We were about seven nautical miles off the south coast of Pico in the Azores, in water about a thousand metres deep.

As the boat drifted away under the press of the wind, the false orca followed it, then returned to approach me, then returned to the boat. It repeated this cycle for about 20 minutes. On a number of occasions, as it approached, it opened its jaws sligthly to reveal the very adequate teeth with which it seizes prey that range from pelagic fish such as tuna and mahi-mahi, to smaller dolphins.

While the glimpses of teeth in an animal about seven metres long swimming slowly head on towards me caused momentary pause for thought, the false orca showed no signs that I could interpret as aggression. Indeed, there are reports of false orca bringing gifts of fish to humans in the water. But false orca do have a reputation as fierce marine predators. According to the International Union for Conservation of Nature and Natural Resources (IUCN), false orca have also been known to attack humpback whales and even sperm whales.

In previous years, in the same waters, we have noticed the behaviour of sperm whales change when pods of false orca have been reported in the vicinity. Whether the change is correlated with false orca presence is unproven, of course, but sperm whales that had earlier been dispersed
and placidly lolling about on the surface, began purposefully swimming towards each other to form a group in the presence of a large female. This whale reared her flukes into the air – higher than any others that we have seen – and repeatedly thumped them down onto the surface
of the sea. A signal to circle the wagons? A call for reinforcements? A warning to predators who might fancy a new-born sperm whale calf? No-one knows.

Similarly with false orca; yet another marine species about which we know too little. They’re not very common, although they are widespread throughout the world’s oceans and seas, with the exception of the polar areas. They’ve been reported far from the sea in Chinese rivers. IUCN classifies them as data-deficient; that is there is insufficient knowledge and data available to determine their population status, and whether or not they are at risk. They are certainly hunted and killed in some numbers, mainly in Chinese and South East Asian waters, and in some islands of the Caribbean. Long-lining is known to kill numbers of them too-usually as a result of the false orca snapping up fish that are on the hooks.

This encounter ended as dramatically as it had begun. And surprisingly too. The false orca suddenly flinched and fled at high speed. Straight down, into the unfathomable blue. The reason? Four grey-ghost like Risso’s dolphins (Grampus griseus) streaking in near the surface, then veering away and dissolving in the haze as soon as the false orca disappeared. It seemed to us that their purpose was solely to put the false orca to flight-perhaps to protect young of their own. Whatever the reason, the behaviours of both the false orca – predator turned fugitive, and the Rissos, usually shy and retiring, but clearly exercised by the presence of the false orca – offered another fascinating insight into life in the wild blue realm of the open ocean.

(Note: Entry into the water with cetacea in the Azores is carried out under permit issued by the Secretaria Regional do Mar, Ciência e Tecnologia with precautions taken to avoid disturbance to the animals. Swimming with whales is forbidden in the Azores without prior written permission of the Secretaria)

All the photographs we take are made available free of charge for any non-commercial uses related to research, education, or conservation. We routinely share them with whale and cephalopod scientists in various parts of the world. For access to these shots, please click here to contact us.