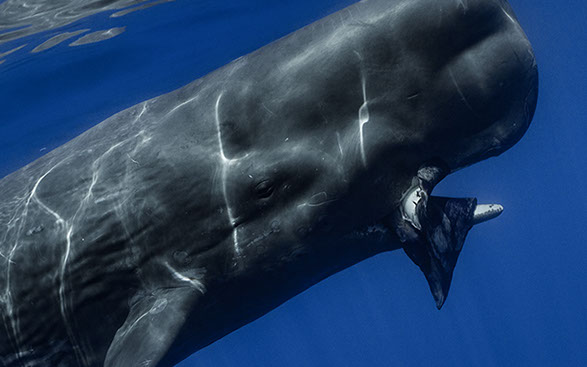 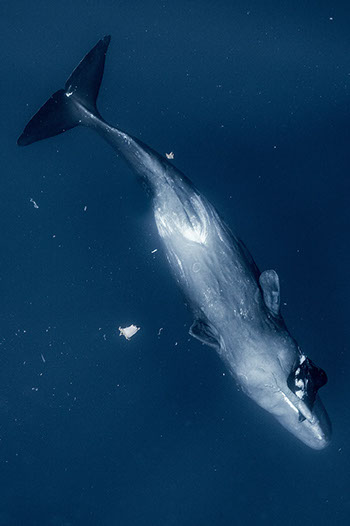 Thanks for contribution to:

Around 1730 on July 23, 2010 a young male sperm whale surfaced at latitude N38.39.052; long W28.26.437, about seven nautical miles north east of Ribeininha Point, on the island of Faial in the Azores, with a large squid firmly clamped in its jaws.(fig 1. and 2.) It is rare to see sperm whales with squid near the surface. Sea conditions were calm.

Whales in the area were generally moving to the north east via the Sao Jorge Channel. Water depths in the vicinity range from 500 metres to 1200 metres, with all whales seen during the afternoon outside the 1000m isobath.

From observation of the squid in the jaws of the whale it appeared to have been taken head on, with its swimming fins hanging symmetrically down each side of the whale’s jaws. The width of the body, fin tip to fin tip was estimated to 1.5 to two metres.

The whale itself was around six to seven meters long, and carried extensive scarring and marking on its skin, some circular lesions presumably caused by the suckers of large squid.

After swimming on or near the surface for about ten minutes with the squid held in its jaws, the whale sank slowly on its side, and then on its back convulsively chewing and snatching at the squid’s carcase. As is visible in the photograph (fig 3) , this method of consumption resulted in considerable wastage of the whale’s food.

In contrast to the floating, dismembered head of a giant octopus found shortly afterwards in the same vicinity (presumably also the remnants of sperm whale prey), the fragments of squid all slowly sank into deeper water, followed by small groups of opportunistically feeding sardines.

From a review of the photographs, Dr Steve O’Shea, Director, Earth & Oceanic Sciences Research Institute, Auckland University of Technology considers that the “size, length and thickness of those fins relative to the length of the mantle (that we can see) of this squid make it unlikely that this is an Architeuthis (a giant squid). Rather, Dr Shea, considers, it is most likely Taningia danaeii or a large mastigoteuthid, interchangeably known as Mastigoteuthis cordiformis or Idioteuthis cordiformis, both species that grow to substantial size and weight. (pers comms)

The whale shown is unusual for another reason. Both its swimming paws show signs of mutilation, presumably by predators such as sharks or orca. This is commonly observed in sperm whales. However, the right paw displays a clean circular perforation near the trailing edge. (fig 4). he cause of this is unknown. Torn notches on the same paw perhaps suggest injury from a peg-like tooth, although there could be other causes.

Note: Photographs taken under permit issued by Secretaria Regional do Mar, Ciência e Tecnologia with precautions taken to avoid disturbance to the animals. Swimming with whales is forbidden in the Azores without written permission of the Secretaria.

All the photographs we take are made available free of charge for any non-commercial uses related to research, education, or conservation. We routinely share them with whale and cephalopod scientists in various parts of the world. For access to these shots, please click here to contact us.